It’s been a real pleasure seeing 215 Ink grow over the past few months.  I’ve been excited about their ever-growing lineup of quality comics, and it seems more people are starting to recognise that.  Vic Boone in particular is a series that has had quite a bit of buzz around it, perhaps the most I’ve seen for any 215 Ink book thus far.  I was pleased to see that the first issue even got a (very positive) review in IGN’s weekly round-up.  I think this is a big deal, because in my personal experience at least, there have been several occasions where a highly positive IGN review has convinced me to try a comic I otherwise wouldn’t have known about.  Now, I’m no IGN, but having read the first instalment of this new series by writer Shawn Aldridge and artist Geoffo, I’m eager to join the chorus in singing its praises.

Shawn Aldridge knows his noir.  Here is a story seeped in the classic tropes of the genre: the beaten-down gumshoe hero, the mysterious and possibly dangerous femme fatale client, one case serving as a bridge to a much larger, nastier one, a collection of seedy underworld figures with a grudge against our hero.  All present and correct… only we’re in the future, hover cars buzz around a futuristic metropolis, and the population is peppered with aliens, robots and talking gorillas.

The mesh of pulp genres alone would be enough to give Vic Boone a hook, but Aldridge doesn’t simply rely on that.  He writes with an authority of a writer much more experienced than a relative newcomer like him, with hard-boiled narration and punchy dialogue evocatively bringing the eponymous protagonist to life.  He’s in turns cold, callous, principled, quick-witted, dumb, resourceful, and plain funny.  Speaking of funny, it should be noted that among the highlights of this issue are the occasional detours into the ridiculous.  Take, for example, Vic’s meeting with his tiny man-fly drinking buddy, or even better, his showdown with the magnificently unthreatening Raygun Radicals, who are totally going to kick Vic’s ass once their boss is done grocery shopping for his mom.

Perhaps more than anything, it’s the humor that gives Vic Boone its niche.  Blade Runner ostensibly beat Vic Boone to the punch with the whole “noir against a sci-fi backdrop” idea, but in execution the tone is so different that Vic Boone never feels like it suffers in comparison to the classic.

Not that this is solely a showcase for Aldridge’s quality writing.  Far from it, the stylish art of Geoffo deserves equal praise.  The character designs are reminiscent of Darwyn Cooke by way of the loose pencils and free-flowing, sketchy style of Gabriel Ba.  The parallels to the latter are heightened by Aldridge’s often-psychadelic color scheme, which bring to mind the funky palette of Casanova back in it’s original two-toned run at Image.  Much of the art is simplistic, but Geoffo has a knack for boiling an image down to its starkest key components, allowing for maximum impact. 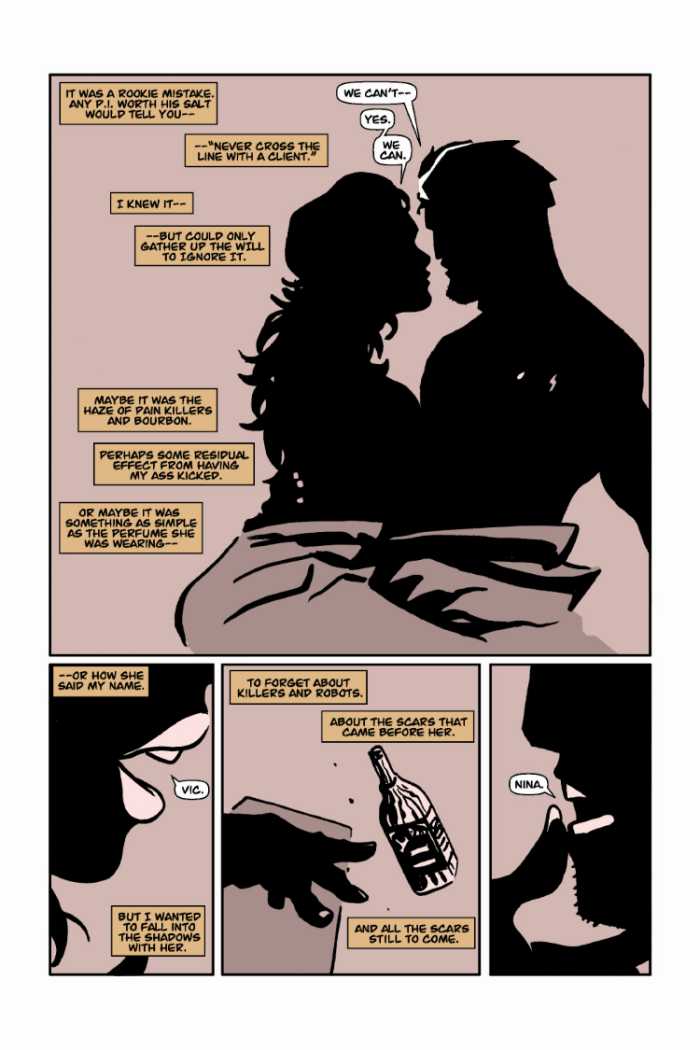 Perhaps my favorite page of the whole issue is the love scene between Vic Boone and the aformentioned femme fatale, Nina.  It’s almost entirely shadow, yet still Geoffo conveys all the important information, while at the same time artistically framing the page, crafting a tableau that, even without Aldridge’s strong scripting, would tell a compelling story all on its own.  The evocative use of silhouette reminds me of Frank Miller.

It seems that, in praising Geoffo, all I can do is compare him to other artists.  But Geoffo is not just a copycat.  Like the story itself, there are a lot of influences at work, but Geoffo’s art melds them all together into something individual that’s very much his own singular style.

Aldridge takes his time with this first issue, focusing on dipping our toes into this world and introducing us to our cast of characters, all while meticulously setting the pieces of the plot into place.  But by the shock finale, the stage is set for business to pick up in future issues.  A stellar debut, with this first issue Aldridge and Geoffo have given us a comic to watch in Vic Boone.