Back in June, when the DC relaunch was first announced, the first comic that emerged as being at the top of my hype list for September, the one I really couldn’t wait for, was Swamp Thing.  I’m a big fan of the character, was excited about him returning to the DCU, and the pairing of writer Scott Snyder and artist Yanick Paquette seemed like a real dream team.  So, I plunged back into the old Alan Moore run, buying all the lovely hardcover editions DC has recently released.  Rediscovering this landmark run, I found it to be even better than I remembered, arguably Moore’s finest work, and I found a whole new appreciation for what Stephen Bissette was doing with the artwork, years (if not decades) ahead of his time.  Swamp Thing is, in my opinion, one of the best characters in DC’s roster, and him getting his first non-Vertigo series in around 20 years is a big deal.

However, as the months have worn on and the big day has drawn closer, my interest in the new Swamp Thing #1 waned ever so slightly.  Don’t get me wrong, every new art preview or interview from Snyder impressed me, but other books, such as Action Comics, Snyder’s own Batman, and more recently Stormwatch, began to surpass Swamp Thing in my personal anticipation stakes.  Oh me of little faith.  Today marks a vintage comic week, and a creative triumph for DC.  I was treated to great comic after great comic from this week’s offerings in the New 52, but standing head and shoulders above the rest as the best of the bunch was Swamp Thing #1.

There is an effective narrative device that Scott Snyder has used in a few of his works.  He begins both the first issue of American Vampire and the first part of his run on Detective Comics with the protagonist, through voiceover, reminiscing about a childhood memory, while the images being shown on the page cast these memories in a sinister new light.  This recurring motif also pops up in Swamp Thing #1, but what makes it all the more intriguing this time round is that the protagonist in question, Dr. Alec Holland, is a character who, until now, is known more for his death (and what followed) than any detail of his life.

At first glance, people might be put off by a Swamp Thing comic without Swamp Thing.  Based on the plot synopsis of this first issue, a rhetorical question seemed to hang in the air: “Should people care about Alec Holland even if he isn’t big, green and leavy?”  In short: yes.  Holland is presented as a man haunted by his past as Swamp Thing, a past that is hounding him, trying to reclaim him.  Plants and greenery seem to follow him wherever he goes, whether it towers ominously in the background or grow in vines and creepers around his feet.  One of the highlights of the issue is Holland’s monologue about the violent nature of plants, which has the unusual combination of being both educational and laced with menace.  But beyond this, Snyder’s characterisation of Holland gives us a sympathetic depiction of the survivor of a monumental trauma; a normal man who has gone through the death and resurrection cycle common in comics, but normally saved for superheroes.  This is best portrayed through a conversation between Superman and Alec Holland that makes up the centrepiece of the issue.  The idea that these two people – on the surface, worlds apart – are united by a common experience, is quite a powerful idea.

But this isn’t a comic that’s all about meaningful conversation and soul-searching.  Out in the desert of Arizona, something awful is happening.  Swamp Thing is a comic that has earned a reputation for delivering some moments of genuinely bloodcurdling horror, and Snyder is able to carry on that fine tradition with a truly gruesome sequence near the issue’s climax.  As this monstrous new threat reveals itself, some iconography comes into play that will be familiar to longtime Swamp Thing readers.  Those who are still haunted by memories of the Invunche – one of the most gruesome creatures to appear in Moore’s run – will get a chill at the fate met by some characters here, and it all but goes without saying that you can’t use a fly in a Swamp Thing without drawing up unsettling memories of Anton Arcane.  This is a story that I believe is totally accessible to someone who has never read a Swamp Thing comic in their lives and wants to see what all the fuss is about, but little Easter eggs like this make the road ahead all the more tantalising for those of us a bit more familiar with the mythos.

I’ve done a lot of gushing about Scott Snyder’s writing, but I would be negligent if I didn’t shower equal praise on the incredible contribution of Yanick Paquette.  Quite simply, this comic looks stunning.  From the very first page, with a cinematic zoom-in from the Metropolis skyline to Clark Kent’s face, followed by a macabre yet beautifully arranged double-page spread, we are immediately immersed in the world of the story.  Paquette is really channeling the spirit of Stephen Bissette here, with inventive layouts that turn each page into an intricately designed tableau, and panels packed with a deceptive level of detail.

Paquette uses all kinds of clever tricks to ensure Swamp Thing looks unlike anything else in DC’s New 52.  Something as small as making the panel borders black instead of white instantly sets it apart, DC Dark indeed.  And it’s in the panel borders where Paquette puts to use a trick that I found particularly clever.  Whenever the ominous, looming threat casting a shadow over this story makes its presence felt on the page, the neat, cirsp panel borders break down, turning ragged and uneven, and the panels within them become more wild and erratic in their layout.  It’s as if this primal embodiment of death and decay were eating through the very fabric of the page, rotting the images and the paper and seeping through to get us.  Indeed, when we see its giant, fly-covered eye, it seems to be staring out of the page, right at us.

This comic is a masterpiece of technical craft, both in art and writing (and let’s not forget the rich coloring of Nathan Fairbairn: this is a comic where green packs as much dramatic punch as in Green Lantern), and is the most exciting first issue of any comic I’ve read in quite some time.  It has human drama, it has horror, and it has mysteries and unanswered questions, including a big one that acts as the first issue’s cliffhanger.  But it doesn’t feel decompressed.  I got plenty of satisfying content in Swamp Thing #1.  But all the same, the wait for Swamp Thing #2 is going to be agonising.  One thing’s for sure, though: I won’t be forgetting what comic I should be looking forward to most this time. 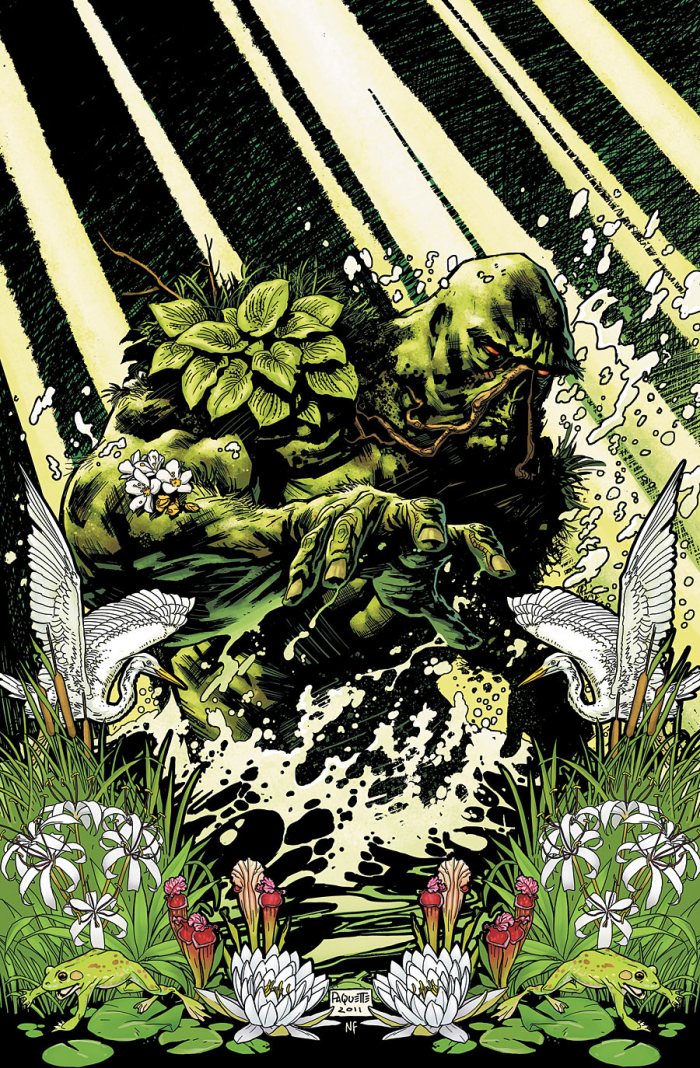