Of all the 52 titles being released this month as part of DC’s linewide relaunch, Batman #1 was the comic at the very top of my hype list.  My favorite character, being written by one of the best writers around right now, with art from Greg Capullo that looked more stunning with every preview released.  This comic had a truly irresistable pedigree, and my anticipation for it was nigh-unbearable.  Thankfully, upon finally getting to read the comic, I can say Batman #1 doesn’t falter under the weight of its lofty expectations.

I’ve already gushed plenty in the past about Scott Snyder as a writer in general, and particularly about how well he handles the world of Gotham City.  His portrayal of Gotham as a dark, hostile, ever-shifting force carries over from his astounding run on Detective Comics to this relaunch of Batman, only now instead of writing Dick Grayson under the cowl, Snyder gets to write the big guy himself, Bruce Wayne.  Snyder gives us a solid introduction to his take on Batman, with an internal monologue carrying through the issue that gives us a sense of his thoughtful, analytical personality.  It’s also an interpretation that’s less grim and tortured than the character can often be depicted.  We still get a sense of Batman’s pathological nature, making moves to ensure he is connected to the Batcave and its surveillence systems at all times.  But there’s a lot of humor and deadpan wit laced through his activities as well, and it’s telling that the first time we see Batman, he’s smirking.  At last, he seems willing to admit that he’s having a bit of fun.

But one element where I feel Snyder gets points over Daniel and his competent work on Detective Comics #1 is that he doesn’t skimp on the Bruce Wayne side of the equation.  As well as characterising Batman, we see that our hero does more as Bruce Wayne than just sit around brooding, waiting until he can put his costume on again.  Bruce is depicted as an eternal idealist, someone who has (perhaps misguided) visions for a Gotham that can be fixed and made better one day.  Snyder gives him a well-written speech about Gotham and its people that says a lot about who he is.  Interestingly enough, it seems like it’s his actions as Bruce in this issue, rather than as Batman, that will serve as the catalyst for the overarching mystery introduced in the book’s closing pages.

That mystery seems like it could be a fascinating one.  Tying into this idea of Gotham as the enemy that has fuelled so much of Snyder’s work within the Batman mythos, much of the narration around the whole first issue is based around various ways to finish the sentence, “Gotham is…”  And it seems this arc could be an execise in answering that question.  We don’t really get into the story much in this issue, in fact we barely skim the surface.  But I get a sense that there is a lot of groundwork being laid here, and this is the foundation of what could be an epic drama.

I also want to note how friendly Snyder has made this comic for new readers.  Imagine, for a second, that someone has been living under a rock their whole life, and doesn’t know a thing about Batman.  As well as the aforementioned introduction to both Batman and Bruce Wayne (and an unobstrusive reference to Batman’s origin story too), the comic opens with an Arkham-based action sequence that introduces us to several of Batman’s iconic foes.  We then go into a scene which introduces us to Commissioner Gordon and his friendship with Batman, set – where else? – on the roof of the GCPD building.  In a single double page spread, we’re shown the Batcave and several of Batman’s famous vehicles.  We’re then introduced to three of Batman’s proteges, and in a single panel, we are given the concise backstories and current statuses of Dick Grayson, Tim Drake and Damian Wayne.  The idea of multiple Robins, which might have been confusing for a new reader, is made quite palpable.  In the party sequence, we’re introduced to butler Alfred and shown that he is Batman’s closest confidante, and we also get a sense of Bruce’s wealth and influence within the city.  All the tropes are crammed in.  In terms of selling the concept of Batman to a newcomer, this certainly gets an A grade.

And speaking of selling Batman to a newcomer, anyone picking up this comic and flicking through the pages is going to be quite simply blown away by Greg Capullo’s pencils here.  I’ve seen some complain that Capullo’s pencils are too clean and cartoony for Batman, from people who expected dark and moody visuals.  I disagree.  Dark and scratchy art can offer an interesting psychological perspective for a more experienced reader, but if the goal is to get new fans, then the perfect hook is clean images, plenty of wide, panoramic views in large panels, an open, visually dynamic, exciting design.  Already, Capullo’s work here reminds me of what Tim Sale was doing in The Long Halloween, or what Jim Lee was doing with Hush: giving us instantly iconic art that has a very wide appeal.

Capullo’s pencils are highly impressive, and he offers some clever layouts too: one of my favorites has The Joker and Batman back-to-back in silhouette, with lots of jagged, window-like panels of them in combat peppered in front of them.  But we can’t ignore the contributions of his artistic collaborators.  Jonathan Glapion does some atmospheric inking here.  Any Batman comic worth its salt is going to be making good use of blacks and shadows, and that is very much the case here.  We very rarely get a view of Batman that isn’t cast into some kind of shade, and Glapion’s heavy blacks really enhance this feeling of him being a creature of the night.  The washed-out coloring of FCO Plascenia, meanwhile, really enhances the grim aesthetic of the city, with the colors in the Arkham opening proving particularly impressive.  I also noted the faded color palette in Detective Comics, so perhaps the colorists are trying to maintain a consistent aesthetic between the flagship Batbooks.

In the end, Batman #1 didn’t turn out to be my favorite of all the DC #1s as I expected it would be coming into September: thus far, that honor is still held by Swamp Thing #1, also by Scott Snyder.  But I would say Batman #1 is the best New 52 title I’ve read so far that doesn’t fall under the “DC Dark” banner.  It’s classic Batman, and should feel simultaneously rewarding for old readers and welcoming for new ones.  And in the background, we get the sense that a narrative is brewing that could make the issues that follow even better. 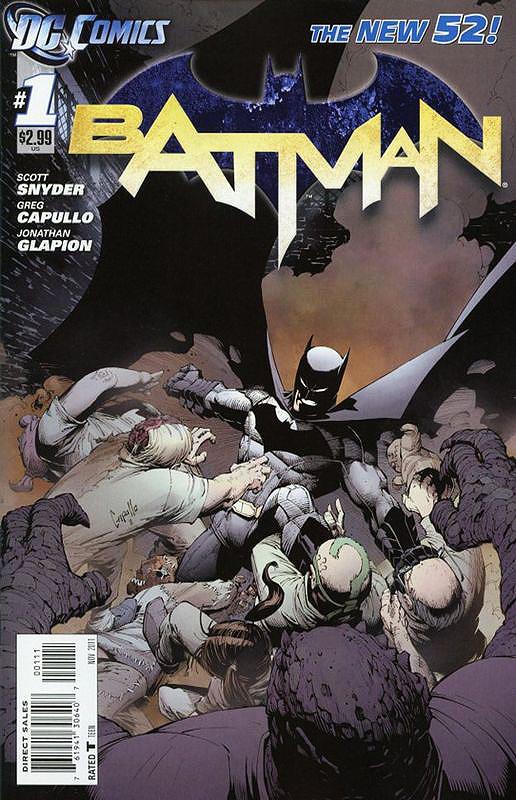