I’ve never really been a Wonder Woman fan.  She’s a character I’ve certainly been interested in and curious about at various points, but never enough to actually buy a Wonder Woman comic.  All the same, I can’t help but root for, and hope that she can find a niche and begin to catch up with the two more successful elements of DC’s Trinity, Batman and Superman.  J.M. Straczynski’s controversial run was not that pivotal story that helped to elevate Diana.  In fact, some say it left her worse off than before.  So, with DC’s relaunch, we’re in a position where the character can be put through yet another reinvention, this time by writer Brian Azzarello and artist Cliff Chiang.  I must admit, I was curious, and I figured that if the New 52 was supposed to be about making comics accessible to new readers, I’d put that to the test and dip my toes into a mythos even I as a comic fan have always been on the outside of.

Going into this series, there was a lot of intrigue about just what approach Azzarello was going to take with Wonder Woman.  Aside from some enigmatic remarks about this being a horror-fuelled take on the character rather than your traditional superhero comic, Azzarello hasn’t exactly been forthcoming.  So, coming into this issue, we were still left with the question of exactly how the 100 Bullets writer was going to make Wonder Woman appeal to a wider audience.  The answer, would seem, that he does a bit of a cheat, by carefully not focusing too much on Wonder Woman herself in this opening issue.  What we get is a story that wouldn’t be out of place at Vertigo – a bloody fantasy-horror about the gods of Greek myth living on Earth among us and engaging in sinister agendas which a regular human woman finds herself caught up in – but also has Wonder Woman showing up and kicking centaur ass.

Wonder Woman was a comic I felt pretty conflicted about.  On one hand, the story as it’s currently unfolding is a bit baffling so far.  There is a lot of vague prophecy thrown around, and I wasn’t sure if this was stuff I would know if I was up-to-date on my Wonder Woman history and/or Greek mythology.  I feel like I’ve walked in on the second chapter and I’m missing some important info, though I think the disorientation is intentional, and this is a mystery that will be pieced together as the story progresses.  But despite my confusion, I was still intrigued by what was going on.  There were some clever concepts and some eerie ideas at work, particularly the earth-bound rendition of Apollo, situated in Signapore on the roof of the tallest building in the world – where, of course, he can get closest to the sun.

This is also a darker, more violent tale than you might expect from a Wonder Woman comic.  Horses are mutilated.  Arms are chopped off.  Women are incinerated.  Azzarello isn’t pulling his punches here.  But I’d say it works.  This issue has a tough, gritty vibe that sets it apart from both your conventional superhero fare and even what you might expect from a more mythology-heavy take on the character.  Even the new title design suggests a harsher, tougher story than we might expect.

But the real star of the show for me this issue was Cliff Chiang.  The crisp, clean lineworks and heavy inks provide a book that’s reminiscent of Darwyn Cooke, but still very much its own style.  The aforementioned scenes with Apollo are given much of their eerie power by the way Chiang renders them.  Combined with the smooth, textured colors of Matthew Wilson, this is just a slick looking comic.  While I’m waiting for the plot to come together, the art is certainly enough to hold my attention and bring me back for more.

So, for my first toe dipped into the Wonder Woman waters, I’d say I ended up enjoying it.  There’s some good ideas here, and I can sense Azzarello is trying to build a mythology around Wonder Woman that feels fresh and edgy.  Combine that with stylish art by Chiang, and this stands as one of the better New 52 releases of the week. 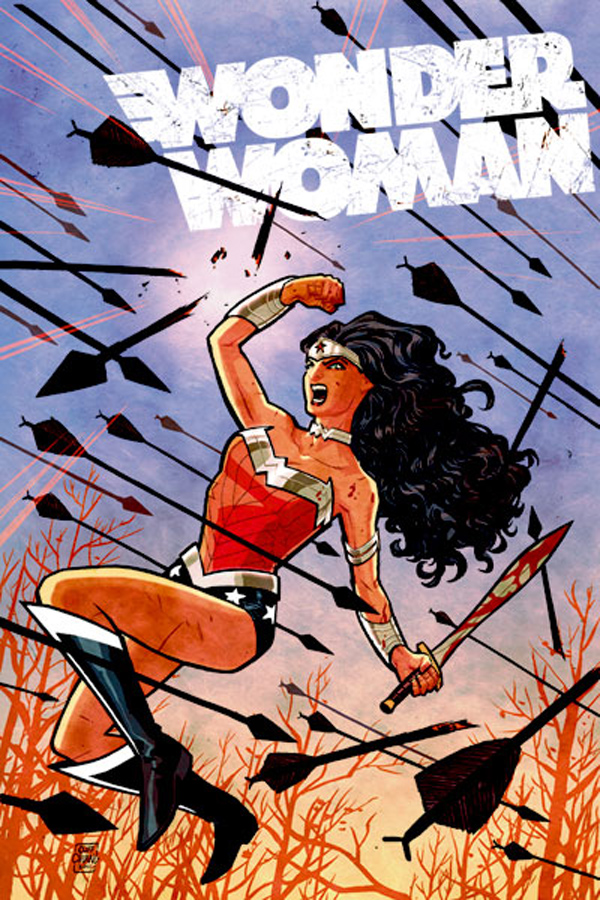