As hard as it may be to believe, not everyone is in love with Scott Snyder and Greg Capullo’s Batman.  Those who have been reading my reviews will know I’ve been highly vocal in my praise for the first two issues of the relaunched series, and that I’d rank it as the best of the current Bat-titles, a field that’s actually proven to be pretty competitive.  But I’ve talked to a couple of people who have expressed disappointment, saying that after the dark, psychological tone of Snyder’s Detective Comics run, Batman has felt more like standard blockbuster superhero fare.  Those critics might be more satisfied with the sinister turn the narrative takes in this third chapter.  With the steady build in dread over the course of the issue, Batman #3 is paced a lot like a horror story.

Scott Snyder has been very methodical with his pacing and his plotting, but now the pieces are falling into place and the scope of the threat Batman faces is starting to become apparent.  In my review of the last issue, I talked about how Batman’s utter confidence in his deductive skills and his knowledge of Gotham City was being reframed by Snyder as a kind of hubris, an inability to accept that there could be anything at work in Gotham beyond his understanding.  That very much comes to the fore here, and though we do get an excellent action scene set in an underground railway tunnel, for the most part the challenge to Batman here is a cerebral one, and this is a case that will push his deductive abilities as “the world’s greatest detective” to the limit.

The threat of the Court of Owls is almost entirely off-panel in this issue.  They are built up through insinuation and recollection of old folklore and superstition, rather than a physical presence.  But in spite of this – no, because of it – they are built up to be a terrifying threat.  For now at least, they are intangible, unknowable, and, as a result, unfightable.  Snyder draws once more from his Big Book of Trivia to Make You S**t Yourself to come up with some unsettling facts about owls – they are natural predators of bats, they take the nests of rival birds rather than building their own – that when applied to the context of the story make them seem even more formidable as a foil for Batman.  The closing sequence of the issue really hammers home how omnipresent the Court of Owls are, and how deeply ingrained they are not just to the history of Gotham, but to the Waynes.  And the ranting of Alan Wayne in the flashback to 1922 that opens the issue – “Their nests are all around!  They’re in my home!  My home!” – foreshadows that their influence could soon prove to be even more uncomfortably intimate, and the old nursery rhyme’s warning that, “They watch you at your hearth, they watch you in your bed” could turn out to be eerily accurate.

Indeed, if there’s any small complaint I have with the narrative of Batman #3, it comes with the final page.  At first, I thought the second last page was the end, and that was satisfying.  The revelation of how far-reaching this menace was, and the challenge Batman faced in getting to the bottom of it, ended things on a note of quiet dread that really left me wanting more.  But then I turned the page, and was met with a rushed, cheap cliffhanger that I really don’t think the issue needed.  I can appreciate the reasoning behind it, though, and it wasn’t enough to hurt my overall enjoyment of what was otherwise a perfectly structured instalment of this saga.

Once again, the art of Greg Capullo is stunning.  In fact, this could very well be his finest work on the series thus far.  His work has always been slick and stylish, but here Capullo really starts experimenting with his layouts and angles in a way that makes this a visually dense, rich reading experience.  The inventive layout of having the various Wayne buildings in the Gotham skyline framed inside a guilded owl’s eye was striking, and the transition from what could be a pair of glowing owl eyes in the darkness in 1922 to a pair of train headlights approaching in the present day is one of the best match cuts I’ve seen in a comic in a while.  Perhaps my favorite angle used in a panel comes on page 9, where we get a POV shot of Bruce and Alfred talking in the Batcave from behind Batman’s mask, which has been left sitting on Bruce’s worktable.  We see the pair through the narrow slits of the eye-holes, adding an off-kilter, sinister dimension to the talking heads scene.

These were the standout artistic flourishes on first reading.  But upon repeat reading, it became apparent that there is a real visual motif of watching and observation going on here, and once you become aware of it, it’s everywhere.  There are a couple of instances when people are talking about the Court of Owls, where the angle shifts to an overhead shot that feels eerily like a POV shot from an unseen observer.  And there is a big focus on eyes.  Not just the aformentioned owl eyes, but lots of close-ups on human eyes, and things and people reflected in those eyes.  And once you’ve got eyes in your head, eye-like circles start popping up everywhere!  The shot from the blackness below, looking up through the open manhole cover, the railway tunnel at the bottom of page 4 with the far end looking like a little pupil, the circle honed in on Luka Volk when Batman is using lie detector technology on him, the insignia on the Talon’s blade, Batman silhouetted against the full moon on page 13,  the device Batman uses to cut a hole in the floor on page 14, the giant owl insignia we see looming behind Batman or over his head in the scenes that follow.  It all reminds us of the Talon and his circular, owl-like goggles.  And it enhances this pervasive sense that the Court of Owls are everywhere, always watching.  This is a perfect example of art and writing going hand-in-hand and creating an immersive experience for the reader.

It would be negligent of me to not also continue praising the work being done by inker Jonathan Glapion and colorist FCO.  As I’ve mentioned before, Glapion’s heavy blacks are a major part of this title’s overall aesthetic, and that applies in this issue more than ever.  His sharp lines also serve as the perfect compliment to Capullo’s distinctive style.  Similarly, FCO’s muted color palette – making precise use of earthy browns/oranges and cool blues – gives Batman its own unique feel that sets it apart even from the other Bat-titles.  The whole creative team come together to ensure this is just a great-looking book.

It’s getting hard to review this title on a monthly basis, without just repeating the “it’s great!” hyperbole.  My conclusion for this issue is the same as it was for the last one, and I imagine next month I’ll be saying the same thing: Batman #3 is the best issue yet, building on what came before and steadily ratcheting up the tension.  It’s so rewarding when a comic doesn’t just coast on the power of the title character’s brand name.  The writing is striving to provide fresh insight into Batman’s character, while the art is innovative and charged with a desire to explore new and exciting possibilities the comic medium makes available.  This is comics done right. 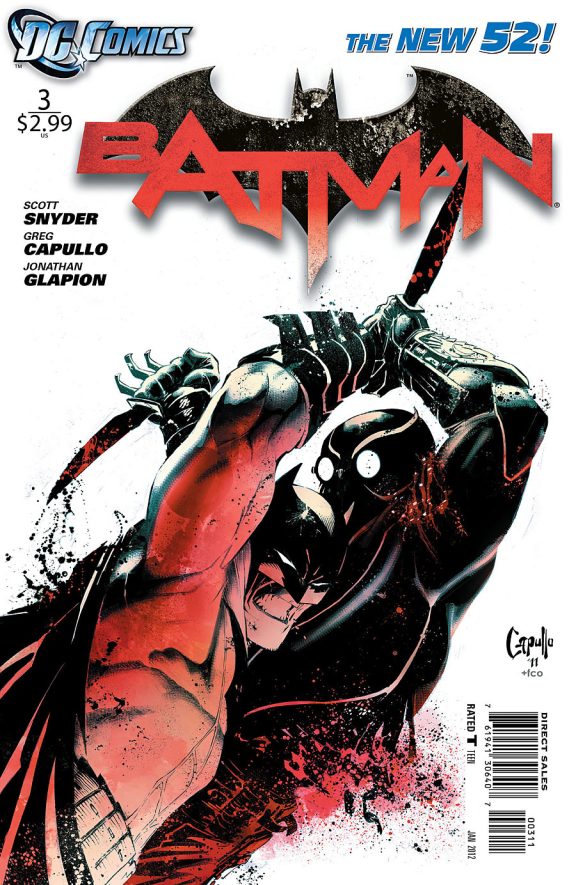