At this stage, I imagine it goes without saying that Swamp Thing #7 features the long-awaited return of the title character.  I mean, it’s on the cover.  So, most of us knew going in that this latest instalment of Scott Snyder and Yanick Paquette’s New 52 relaunch would give us the much-delayed moment that even those who have thought the book to be otherwise perfect have been clamouring for, and for that it was always going to rate highly.  Buth both Snyder and Paquette do more than simply give the readers what they want.  That happens too, of course, but Swamp Thing #7 manages to exceed even lofty expectations and emerge as a truly stunning comic, possibly the best in the series so far.

Over the course of what is basically a single extended scene, Scott Snyder condenses the key themes and ideas that have been explored over the preceding 6 issues into a single chapter that will serve as both a pivotal turning point in the larger narrative, and a mission statement for Snyder’s whole interpretation of the Swamp Thing mythos.  Snyder’s Swamp Thing is a story of choice VS destiny, and you could make a case for both claiming victory here.  Since the relaunch, we’ve been told that becoming Swamp Thing has always been Alec Holland’s destiny, and that his attempts to escape this fate were futile, and here, indeed, the prophecy is fulfilled.  But we also see that, this time round, Alec Holland is not a victim of fate, but rather an active participant in his own transformation.  And as Abigail Arcane battles against her own transformation, it becomes apparent that this choice VS destiny theme will continue to play out as the story enters its next phase.

On the subject of Abigail, one of the other key themes of the series is love, and its ability to overcome impossible odds.  Alan Moore’s seminal run on Swamp Thing was, at its core, a love story, and I’m glad this element has been maintained.  While Moore set up obstacles of distance between Swamp Thing and Abby, first sending Swamp Thing on missions around the world and then sending him to the far reaches of the universe – with the goal of being reunited with his love always what drove him – Snyder’s obstacle is more abstract, but arguably much harder to overcome.  Just as Alec Holland is the avatar of life, Abigail Arcane has been summoned as the avatar of death.  The two are sworn enemies, and have always meant to be so.  We get ominous glimpses of the monstrous creature Abigail is becoming throughout this issue, foreshadowing the heartbreaking conflict that lies ahead.  But even so, it is still Abigail that Swamp Thing is fighting for, still that desire to be reunited with her that drives him.  “I’m doing it for her,” are his final words as a human.

The motif of death and rebirth – and how the two are linked – is also given enhanced attention here, obvious even from that beautiful front cover.  How much do the designs surrounding Swamp Thing remind you of a butterfly?  In the issue itself, Alec Holland’s body (and indeed, Abigail Arcane’s body also) is housed in a cocoon while his transformation takes place.  In the previous issues we’ve seen much of the encroach of death and decay, but the final image of this issue is that of flowers blooming: from death springs life.  In his argument with the dying Parliament of Trees, Holland suggests that The Green is not too different from The Rot.  Life and death may be in constant struggle, but they complement one another.

I’ve said all this, without even getting into Yanick Paquette’s astounding artwork.  It’s interesting how, even when talented artists fill in for him, Paquette’s return to the book after an issue’s absence always feels like an act of triumphant restoration.  This is how Swamp Thing is supposed to look.  But Paquette pushes his invention to a whole new level this issue, with every page becoming a jawdropping, meticulously-crafted tableau.  Traditional panel borders are abandoned altogether in favor of lush vines and floral patterns doing battle with the black, splotchy chaos of The Rot.  The images themselves are surprisingly packed with detail, demanding to be lingered over, savoured.

Though the whole issue is gorgeous, undeniably the standout visual sequence is the aforementioned transformation.  In a collection of wince-inducing extreme close-ups, we see various parts of Alec Holland’s body – inside and out – being converted by The Green, the images getting smaller and more tightly packed as the transformation picks up pace.  And then it all culminates in a pageturn reveal that is sure to become an instantly iconic image.  Though the experimental tableaus Paquette has liberally employed throughout the book often feel like splash pages, in this instance here when he actually uses a full page splash, the impact is like a gut-punch.

It’s also worth emphasizing again how much the rich, vibrant colors of Nathan Fairbairn enhance Paquette’s artwork.  In Holland’s dialogue with the Parliament of Trees, the deep shades of green and orange make the pages feel like they are teeming with life.  And on the flipside, our glimpses of the Kingdom of Bones become laced with an almost tangible pestilence, that richness of tone turning sickly sweet when shifting to a palette of reds and yellows.  Snyder and Paquette have been showered with much well-deserved praise, but Fairbairn just might be the unsung hero of Swamp Thing.

This is a title that has ranked near the top of DC’s output since the month of its debut, but with Swamp Thing #7, the creative team raise their game.  This feels like a culmination of all that has been brewing in the series over the past six months.  But more than that, it makes those excellent first 6 chapters feel like little more than a prelude, suggesting that the stage has been set for a truly epic saga to unfold.  Swamp Thing truly is back. 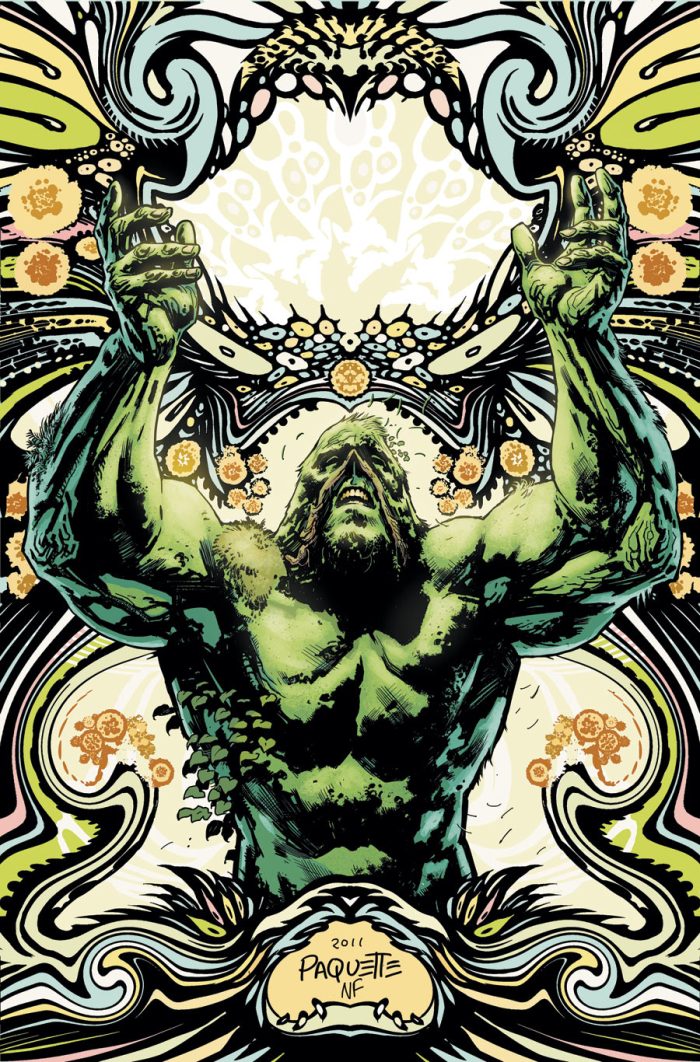