As the writer of a series of review columns called The Creator-Owned Zone, it would be remiss of me not to share my thoughts on the biggest creator-owned comic of the year.  In fact, word is that The Walking Dead #100 is on course to be the biggest comic of any kind this year, projected to sell more than any Marvel or DC release in 2012.  Pretty impressive for what started out as a little indie book that could.  Issue #100 is a huge milestone for any comic, particularly a creator-owned series that has made do without the corporate backing or brand recognition of an iconic superhero, and that in the case of The Walking Dead has had the same creative team for the vast majority of its run.  Between this huge release (commemorated with an array of variant covers from some of the biggest artists in comics), the series’ current and now longstanding dominance of the bookstore graphic novel sales charts, and the upcoming 3rd TV season of The Walking Dead among the biggest attractions of the as-of-this-writing ongoing San Diego Comic-Con – with a panel in the massive Hall H usually reserved for the big movie previews – it seems like we are in the triumphant summer of The Walking Dead.

I must admit, I’ve had mixed feelings about all of this.  As someone who has been a fan of the comic for the past few years, it’s been so great to see the television show hit so big, opening up this world to a much larger fanbase and in turn getting more eyes on the comic.  It remains a surreal joy to see Robert Kirkman’s profile continue to raise, with his executive producer status on the show turning him into a bit of a TV personality, with regular fixtures on AMC’s Talking Dead show and guest appearances on other media.  As a fan of creator-owned comics in general (and indeed, as someone who wants to write my own), it has been very exciting to see this area of the comics industry flourish, with more high-profile quality titles launching and some of the industry’s biggest and best names launching new creator-owned properties, something which I believe the huge crossover success of the Walking Dead machine has played no small part in facillitating.  However, while I’m generally pleased for the title’s success, lately I’ve felt my passion for the product itself wane.  I feel the TV series stumbled in its second season, meandering and aimless save for a few notable bright spots, though it did recover in the last few episodes to deliver a strong close.  More worryingly, the comic itself has faltered for me.  Though the series as a whole comfortably stands amongst my all-time favourites because of its dizzying high-points, for over a year now I just haven’t been gripped by the latest story developments.  At points I’ve wondered if I was just buying out of habit, with the title going from first on my read list on the week of its release to nearly last, and though the storytelling remained solid enough to ensure it wasn’t in immediate danger of being dropped, I was unsure if the series could continue to hold my interest long term after that #100 milestone.

But then The Walking Dead #100 came along and just blew me away.

Rather than stopping the plot dead to do some special anniversary one-off story, Kirkman made the wise decision to just make this another chapter in the ongoing story, albeit a highly dramatic, utterly gripping one.  After being built up for the past several issues as an off-panel menace, the main thrust of this issue is finally getting to meet Negan, the leader of the tyrannical army of mauraders called The Saviors, who keep the various communities of survivors under their thumb.  And boy, is he a total scumbag.  I already want him to die a horrible, horrible death.  Many believe The Walking Dead was at its absolute best during the Woodsbury/Governor saga, as The Governor was one of the vilest villains to ever appear in a comic book, and having such a potent antagonist helped to really put the whole plight of the protagonists into focus.  Post-Governor, the series hasn’t been able to deliver another foil in The Governor’s league, with focus instead shifting to this recurring idea that any threat the group faces are poseurs, and no match for our battle-hardened protagonists when it comes to sheer viciousness.  Negan is not yet quite so repugnant as The Governor, but what makes him a compelling villain is, at last, we finally get the sense that our heroes are once again hopelessly outmatched, faced with evil they can’t hope to fight against.  And so their struggle to do so has already captured my emotional investment.

Something else that has perhaps served to drain the excitement from the series in recent months is that things had seemed to get a bit less dangerous.  This was a comic that ruthlessly upheld its “No character is safe” policy, famously wiping out almost the entire cast during one climactic set-piece.  But with the TV series coming along and characters becoming beloved to a wider audience, I started to think Kirkman might have begun pulling his punches, having characters miraculously escape the clutches of death when before they’d have been bluntly offed.  Plus, the move to this new community offered up a new bunch of expendable ciphers who could be offed and provide a body-count where necessary while the remaining core cast remained relatively safe.  Not the case anymore.  I won’t go into spoilers, and I’m not saying anyone necessarily dies in this issue, but for the first time in quite a while, numerous of our old favourites are put in a position where we seriously fear for their chances of surviving.  And getting that old feeling of dread back into this book reminds us how effective this series can be as a horror comic.

Charlie Adlard’s art, paired with Cliff Rathburn’s slick grayscales, remains as potent as ever.  It’s funny how, when Tony Moore first left the book, some grumbled about Adlard’s less flashy style.  96 issues later, Adlard has proved to be a machine, and has utterly made the aesthetic of this world his own.  He has a real knack for “acting”, powerfully depicting the emotions of the ensemble, which has served him well over the comic’s run.  And, as demonstrated to devastating effect in this issue, he can get really nasty when he has to.  One extended sequence of violence even had this jaded, “seen it all when it comes to violence” reader recoiling from the page.

The Walking Dead #100 is a triumph, one of the best single issues this series has had in ages, and a perfect demonstration of what this comic does so well when it’s at its best.  I want Negan to get his comeuppance NOW, but I suspect we’re at the beginning of an extended arc now.  After this issue, I’m definitely onboard to see where that arc takes us.  The Walking Dead #100 absolutely lives up to the hype, and if it does end up being the year’s biggest comic, it’s deserving of the accolade. 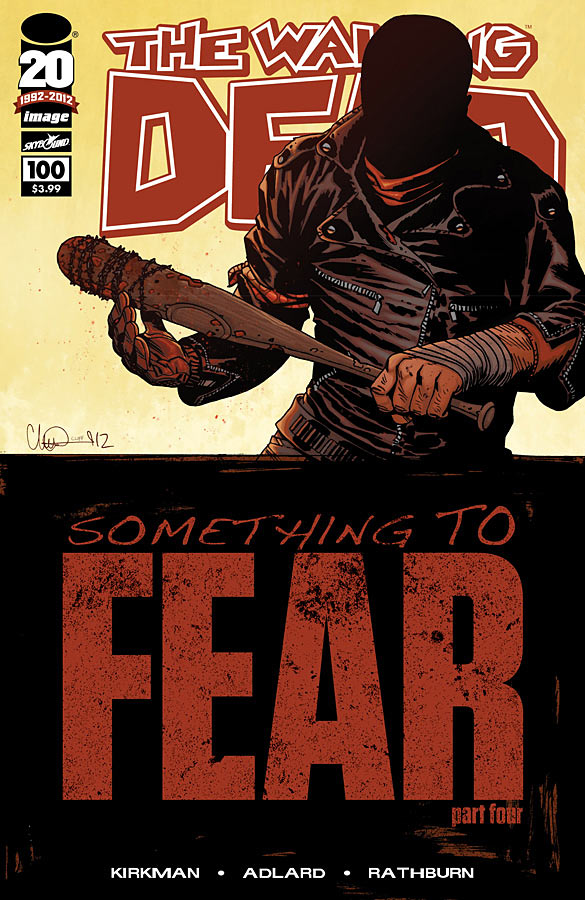