Hello everyone!  It seems that, amidst all the reviews I’ve been writing, I haven’t been using this blog much to talk about my own writing projects lately.  Of course, I keep this blog’s sister site, thestandardcomic.com, fairly regularly updated with that project’s latest developments, but I thought it might be good to spend a week on an overview of my various comics projects, and where I’m at with them.  So, check into the blog daily this week, and I’ll be sharing news, and some exclusive debuts of artwork.

The first project I have to discuss is, of course, The Standard.  I’ve been working on this comic for several years now, but 2013 is the year where everything comes to fruition.  The Standard #1 made its worldwide debut, distributed through Diamond and published by ComixTribe, last week, February 13th.  I’d say it has been a success.  I’m hearing frequent accounts, both here in the UK and abroad in the US, of store sell-outs, in some cases day one sell-outs.  It seems retailers significantly underordered the book, and it has performed above expectations, with consumer demand outstripping store supply.  It’s not ideal, but I’d say it’s a good problem to have!

But the launch of issue #1 is just the beginning.  Next up is the worldwide relaunch of The Standard #2 in April, with the book already complete and off to the printers in preparation for this.  The plan is to operate on a bi-monthly schedule, and have the whole 6-issue miniseries released by the end of 2013.  That is a crazy thought to me.  Something that’s been part of my life since 2008, and 2013 is the year it finally comes to an end.  Well, in 2014 we’ll hopefully be seeing a graphic novel collected edition of the series with plenty of juicy backmatter, so I’ll be spending some time compiling that, but as far as the comic itself goes, if all proceeds as planned 2013 will be my last year working on it.  Kinda scary, but exhilerating too!

But it’s not just the worldwide release schedule I have to think about.  The first 3 issues were already released locally here in Glasgow, Scotland, and I always wish to continue paying attention to the comic’s roots as a cult Glasgow indie hit.  And so work continues on The Standard #4, which should hopefully be finished in the next month or so.  I’m hoping to make a small preview run available locally in Glasgow, my thank you to the readers who supported me first.  At the very least the comic is going to have a big presence at Glasgow Comic Con in July.

In the meantime, I’m going to share, for the first time, a few preview pages for the long-awaited fourth issue of The Standard, magnificently drawn by Jonathan Rector and vividly coloured by Mike Gagnon.  You’ll see the aftermath of issue #3’s dramatic conclusion, as well as a glimpse at another fiendish foe from The Standard’s past, TV Man.  Enjoy, bold reader! 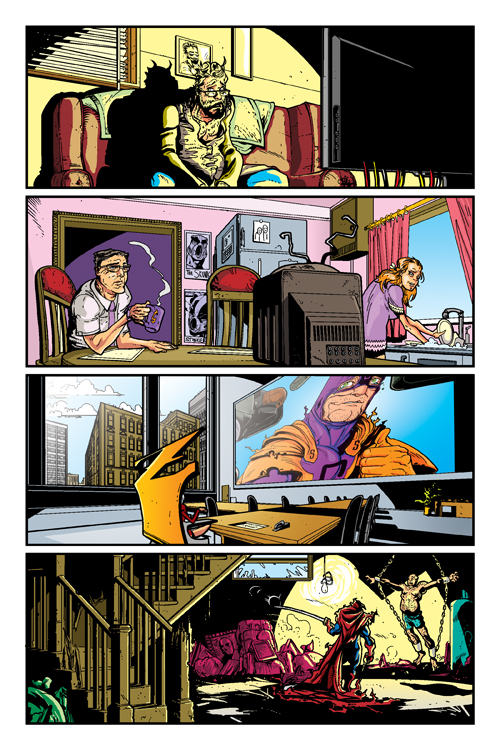 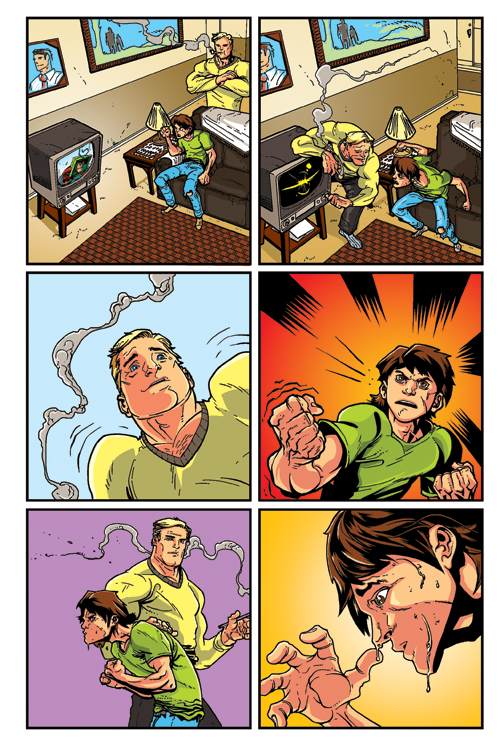