A few months back, I wrote an article about NeverEnding being my most anticipated new comic of 2013.  I had read all the scripts for this series when writer Stephen Sutherland submitted them to meetings of the Glasgow League of Writers, and it quickly got to the point where I was more keenly anticipating new scripts for the series than I was anticipating most complete comics.  And now, just over a week before it makes its worldwide debut at MCM Expo Scotland, I gained access to an exclusive early preview copy of the first issue.  Does the finished product deliver on the lofty expectations and the promise of those scripts?

In short, I loved it.  Sutherland is such a natural storyteller.  He first turned heads a little over a year back with his debut comic, Taking Flight – a kind of kitchen-sink drama approach to the superhero genre set in a recognisable modern Glasgow – but NeverEnding represents a quantum leap in his writing prowess.  Now, as a reviewer, it’s hard to try and hone in on the appeal of this single issue rather than the whole thing, as this is a story that unfolds like a puzzle box with rug-pulling twists, higher stakes and ever-increasing scope with each passing chapter, and going from that knowledge of what’s coming to focusing on issue #1 alone is like assessing an appetiser when you know the most mouth-watering main course is still to come.  But setting that knowledge aside and analysing this as a standalone comics experience, what instantly grabs me is the pace of it all.  NeverEnding is the story of a girl who never sleeps, never stops, never slows down, and that’s reflected in a script that’s always moving, dense with incident.  There’s no worries about decompression here, as no sooner are our characters and their status quo introduced than it’s thrown awry with our protagonist Olivia’s decision to start fighting crime, resulting in one of the most masterfully orchestrated fight scenes I’ve read in any comic in quite some time.  And we’ve barely got our breath back from that when Olivia is thrown into a new and different kind of danger.

But this is not to suggest that NeverEnding is such a plot-orientated book that it skimps on character.  Quite the opposite, in fact, it’s the characters that are arguably the story’s biggest strength.  Olivia’s father, Daniel, and her girlfriend, Sarah, go on to become at least as compelling as Olivia herself as we learn more about them, and we only get a chilling foreshadowing of the series antagonist here (sorry, there I go applying my knowledge of what comes next again!), so it is left mainly to Olivia herself to shoulder the characterisation here.  Thankfully, she immediately marks herself out as an immensely likeable protagonist.  In my recent review of Bandette I talked about how writer Paul Tobin crafted in his title character a convincing portrayal of a teenager you’d want to be friends with, and you get the same feeling about Olivia.  She’s cool, exuberant, idealistic (perhaps to the point of being naive), and the banter between her and Sarah is suitably endearing.  But what I like best is the aforementioned internal monologue, as it allows us to see that she isn’t just instantly this badass superhero because she decides to fight some drug-dealers.  She’s still a teenage girl who doubts herself, who panics, and who worries she may be in over her head.

But this is all stuff I new already.  The real test transitioning from script to comic was seeing how the art would work.  Gary Kelly was someone I’d met and seen some pinups from, but I had no real experience seeing his sequential work, so he was something of an unknown commodity to me going in.  Upon finishing the issue, I was pleased to report that for the most part he did a great job.  The opening double-page spread montage of Olivia’s daily routine is an instant attention-grabber, packed with lots of neat detail and really hammering home that kinetic sense of constant motion that we’re supposed to get from how Olivia lives.  Olivia herself is designed very well.  I knew early on that you couldn’t have cheesecake art for this.  With such a sensitively-portrayed heroine, having some impossible beauty supermodel with massive boobs and tiny hips and that weird 90s-infused anatomy would really undermine that portrayal.  But though Kelly’s work does have a bit of a ’90s/early ’00s vibe, at times feeling reminiscent of a rougher early-day Ethan Van Sciver, that doesn’t transfer into how he portrays women.  She’s build more like an athlete, with a toned body and a touch of a Jessica Ennis six-pack, and she isn’t drawn in a way that feels like sexualised, objectified male gaze, even in moments such as her taking a shower or kissing her girlfriend.  It feels a bit reductive pointing out the insulting things that aren’t done here, but maybe that’s a sad commentary on the industry that the absence of such things is still noteworthy.

Outside of Olivia’s portrayal, the visuals are solid, though I feel like they’d be enhanced by some colour to add depth and texture here and there.  But where the artwork really comes alive is in the fight scene I talked about above.  As a reader, it can be easy to skim-read past a fight scene, but not so here.  Similarly to Michael Lark’s largely silent opening fight scene in Lazarus #1, you feel every punch here, and want to dwell on every strike depicted on each panel.  Here, Kelly soars, adopting all kinds of neat tricks, such as showing a trail of residual images of Olivia as she hops about the page, creating a sense of her crazy-fast movement, or jumping into a crazy Olivia POV shot as she hurtles towards one foe, only to then switch around to have it feel like she’s leaping out of the page at us to whack the next opponent.  It’s a blast of adrenaline, and it feels wild and messy and chaotic, but at the same time clarity is always maintained.  It’s a fine tightrope to balance, but Kelly pulls it off with aplomb.  Like I said, it’s the best fight scene I’ve read in a comic in ages, and even if everything else wasn’t as great as it was, that fight alone would be worth the purchase price of this comic.

Sadly, as we get nearer the end of the issue, deadlines must have been looming, and the artwork starts to feel a bit rushed in places, with Kelly losing some of the precision that made his earlier layouts so impressive.  Just the odd unnatural face here, or clumsy page composition there, and the last page, which I get the sense should have been a big “OOMPH!” to leave us on a cliffhanger, doesn’t quite land as well as it could because of that slight untidy quality.  But the positives far outweigh the negatives, and if this marks Kelly’s debut onto the comic scene, I think it’s a sign to expect great things from him in future.

So, my eager waiting as at an end, and I have finally got to see NeverEnding #1 complete its journey from first draft script to finished comic.  And boy does it deliver the goods, packed with engaging characters and fun, thrilling, snappy storytelling that can hold up to any comic on the shelves right now.  I’m certainly onboard for the series as a whole, and already can’t wait to see the remaining issues brought to life.  There has been a wealth of quality comics to emerge from the Glasgow indie scene this year, but this could very well be one of the best.  If you’re from around these parts, be sure to check this out as soon as you can! 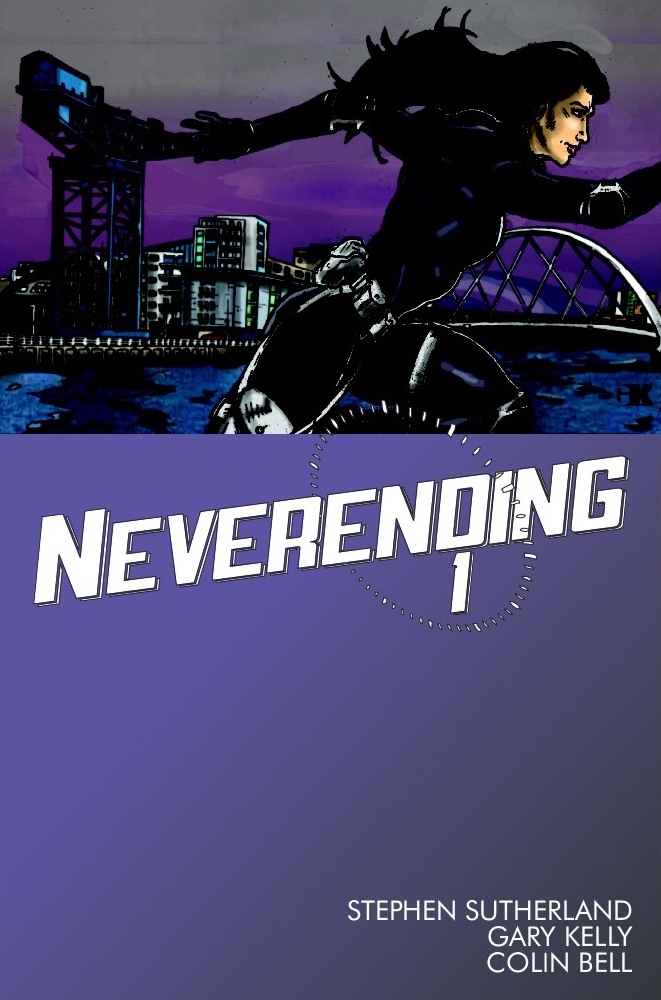 NeverEnding #1 will make its debut at MCM Expo Scotland on September 7th.