Sorry for the long absence of these reviews.  Real-world stuff has got in the way of me being able to keep on top of stuff like this.  I can’t promise a return to regularly-scheduled programming going forward either, but I shall try my best to make up for lost time by cramming in as many reviews as possible here:

Price: Pay what you want

This Christian-themed comic about teens with developing superpowers has some novel concepts, though the execution is ultimately lacking.  Justin Martin is clearly a strong idea man, coming up with quite original approaches to superpowers rather than the generic “super strength” or “super speed”, crafting gifts that have some symbolic resonance with the experience of being a teenager, and the experiences of the various characters represented in each vignette.  However, the stories, while solid ideas for tales on paper, fall a little short in the actual writing, with some flat dialogue or – a nitpicky bug-bear of mine – sentences that don’t properly use commas!  The art of Przemyslaw B Dedelis and the colors of Lya are fine, if a bit simplistic and at times staid.  A fine idea and a worthwhile read, even if the final package feels a bit insubstantial. 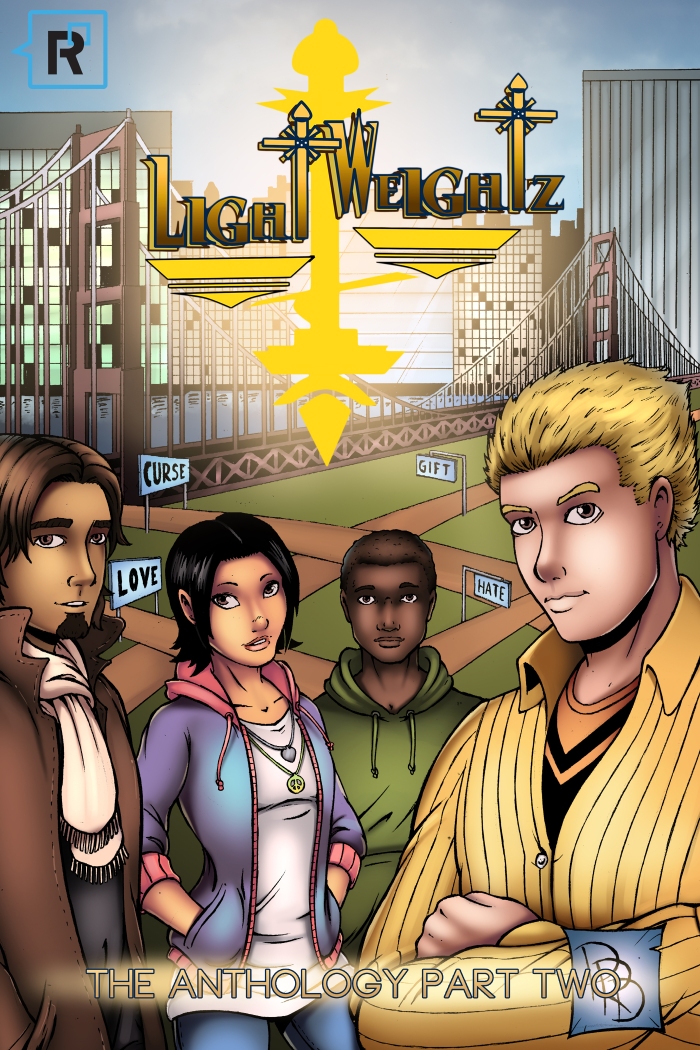 Lightweightz: The Anthology, Part Two is available from the R-Squared Comicz’ official website.

The New-Gen series from A.P.N.G. Enterprises must be something of a masterclass in marketing.  While seemingly having little visibility in traditional comic news circles, they have built up quite a presence, with a reportedly successful Free Comic Book Day release, nearly 40,000 followers on Facebook, a distribution deal set up with Marvel and a feature film adaptation starring Mark Hamill reportedly in development.  So it’s a bit of a shame that the core comic product doesn’t quite live up to the fanfare.  Reading this comic, the writing felt a bit stilted and inscrutable at points, and if this had been an issue #1 I’d have felt like it wasn’t until the issue’s end that things started to get going.  But this is issue #4 of a 5-issue series!  Given the uneventful nature of proceedings at this stage, I can’t imagine what the writers filled three issues with up until this point, and while it’s understandable that a reader might be confused about what’s going on when coming into a book on issue #4, my confusion was more problematic in that I had no real idea of what the larger story was supposed to be.  Thankfully, New Dawn #4 is redeemed by the stellar art team of Jomar Bulda and Analiza Chris Agot, with colors from Sean Forney.  The art team manage to craft a visual aesthetic that feels reminiscent of John Cassaday’s work on Planetary, giving the book a slick, professional sheen. 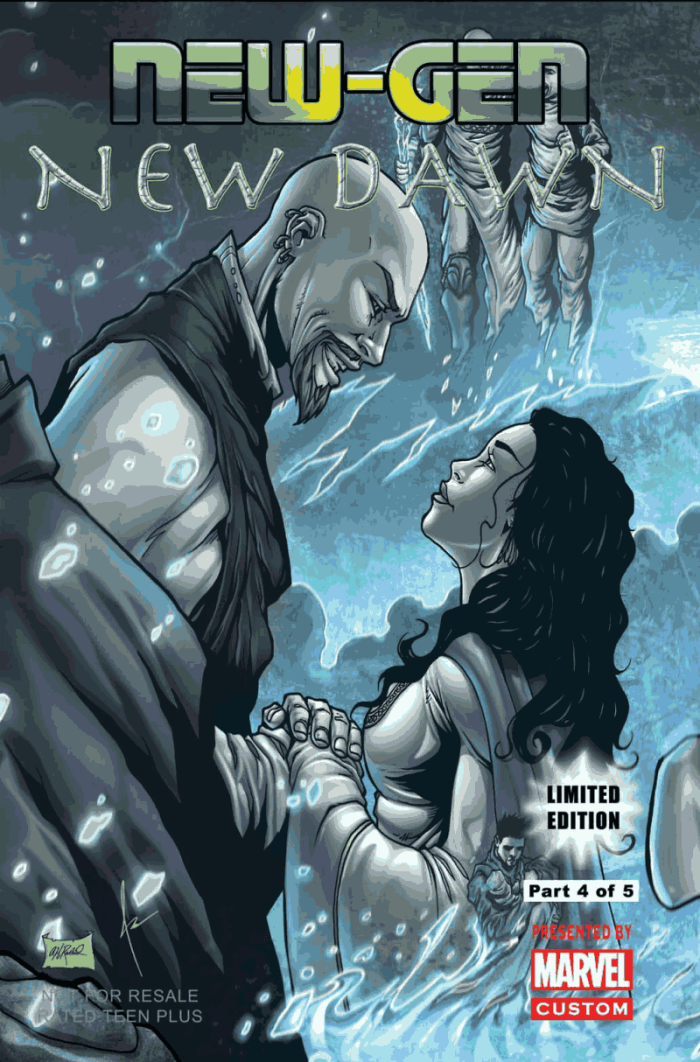 I enjoyed this book.  Cartoonist Andrew Blackman, also operating under the pen name “Rivenis Black”, has crafted a suitably fun, surreal world packed with loopy invention.  The main character, Jackal, has a touch of Mary-Sue about them, but the enigmatic Squid Girl has a marvelous character design, albeit one that’s unlikely to become a popular cosplay choice.  But while Blackman presents himself well as a writer, it’s as an artist that his true strengths emerge.  His layouts are dynamic and offbeat, his characters expressive, his colours vibrant, and his imagery suitably mind-bending.  Rivenis is truly a Jack-of-all-trades, with only his lettering falling short at this stage.  I was intrigued enough by the goings-on here to consider checking out the other issues available from the creator’s blog.

Diskordia #1 is available to buy from ComiXology. The series is also available to read for free from Rivenis Black’s blog.

I wasn’t so keen on this one.  The story Ashley Hewerdine sets up is potentially interesting, with shades of League of Gentlemen, but the comic is let down with its visual presentation.  The artwork is really rough, with a bit of an MS Paint vibe in the linework, though there is the occasional nice image: an amusing silhouette sex scene springs to mind.  The lettering is similarly shoddy, with bubbles at times looking clunky on the page, and the words within sometimes missing full stops amid other technical issues.

Here we have another issue #4 of a 5-issue mini, but this manages to work much more successfully as a standalone read.  Yes, there was a good deal of “What the hell is going on?”, but the plot still managed to be a whole lot of fun in its own right, with enough of the mythology and the wider stakes at play presented to get my teeth into and make me want to go and get caught up.  The martial arts movie/sci-fi mashup (with zombies!) plays out a bit like a grindhouse-infused mix of Doom and Thundercats, with writer Jeff Marsick keeping the plot chugging along like a freight train, packed with incident, while still finding room for character moments that flesh out his sprawling cast.  Meanwhile, the art of “Manly” Kirk Manley is a delight, with heavy lines and enlarged figures that call to mind the work of Stephen Bissette, or the creature feature comics of the 1970s and 80s. This is one of those occasions where you read a comic and enjoy it so much that you feel it deserves to be playing to a bigger market.   A retro treat! 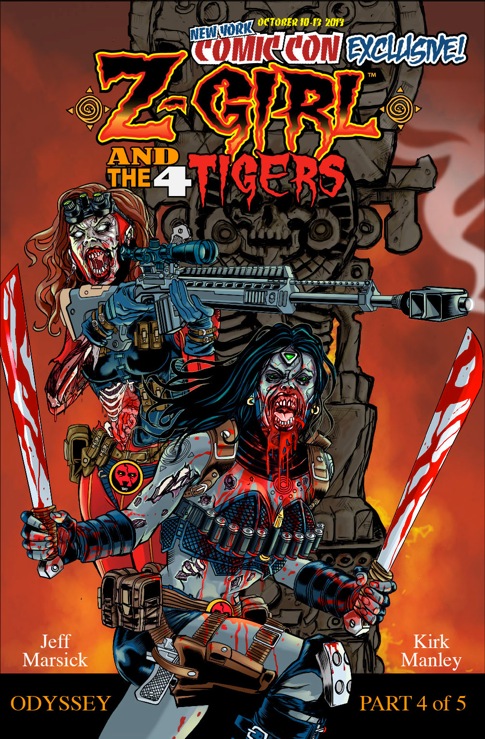 Z-Girl and the 4 Tigers #4 is available to buy from IndyPlanet.  The previous issues are available from DriveThruComics, priced at $0.99.

This turned out to be another compelling read.  A crime story about the murky world of human trafficking, with a vampire twist, Noctua builds on the momentum of its first issue with this second chapter.  Here, writer Andrew Henderson displays a real talent for writing truly vile villains, with numerous characters displaying their heinous ways in a darkly inventive manner.  J.C. Grande, something of a regular of these reviews, also crops up with some of his most refined artwork to date, wonderfully complimented by the understated colors of Eagle Gosselin.  I wasn’t too keen on the HIV angle the vampire aspect of the story took in a shoehorned-in flashback, but aside from that niggle, the story being built up here is highly promising.

Noctua #2 is available to buy from ComiXology.