In my recent review of Theremin #2, I talked about how my enjoyment of that series had prompted me to sample more comics from the MonkeyBrain library.  I tried a couple of issue #1s, one of which was Bandette #1, the story of a young thief in Paris and the adventures she gets into by writer Paul Tobin and artist Colleen Coover.  Soon afterwards, I had ingested issues #2-#5.  Bandette is, quite simply, a delight: charming, clever and, most of all, fun! 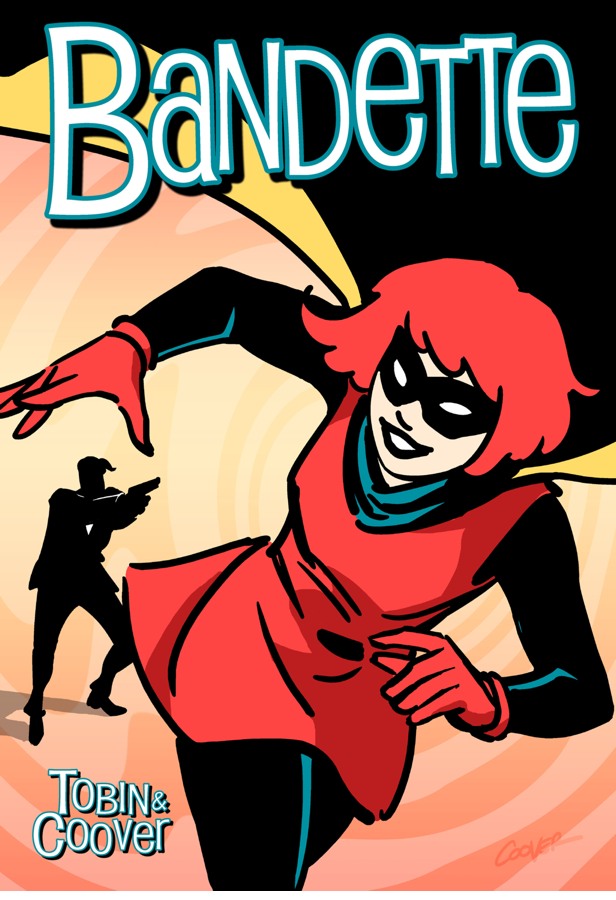 A big part of that fun comes from the aesthetic created by Colleen Coover’s artwork.  The first thing that drew my eye to this book on MonkeyBrain’s Comixology menu was the covers.  Bandette herself was an immediately engaging presence, with her simple yet striking costume design, and that winning smile.  More on smiles and their significance later.  First, I want to note how much of a triumphant invention Colleen Coover’s Bandette is.  She’s just this bubble of pure energy bursting off the page.  Note how rare it is for her to maintain the same position for more than one successive panel.  She’s always striking a dynamic pose, engaging in some acrobatic antic, or even in quieter scenes in her home, making dramatic flourishes with her hands, usually while talking to herself.  And as mentioned, the costume design is inspired in its simplicity: it’s the kind of costume women or even girls (which can’t always be said for female comic characters and their revealing attire) could easily cosplay as at a comic-con and I at least would immediately know who they were supposed to be.  Indeed, there’s one scene in issue #4 where girls and boys alike engage in some Bandette cosplay!

Colleen has an impressive skill for imbuing personality into a character before they even say a word.  From the stern angular features of rival thief Monsieur, to the bulbous, rounded head and massively enlarged ears and nose of Inspector Belgique, to the goofy mannerisms of lovestruck Daniel, a lot is conveyed with quite minimal linework.  This skill extends to location, as we are quite quickly immersed in a very bohemian, picture-postcard Paris with lots of interesting nooks and crannies, drawing on enough real locales to ground us in this being a real place while also crafting a Colleen Coover Paris not quite like anything in the real world or in other depictions of the city in fiction.  One of the biggest compliments I can give is that, without looking at the creative team, you could quite easily think this was a European comic in the vein of Herge’s The Adventures of Tintin adapted for the English language by MonkeyBrain, so authentic does it feel in recreating that vibe.

Herge and European artists of that style are probably a good barometer to use, as that unique quality to the artwork makes it tricky to really compare with any other American comic artists out there at the moment.  In terms of tone, it evokes the light-hearted whimsy the likes of Chris Samnee and Michael Allred are bringing to their respective superhero titles right now.  But in execution, Colleen is quite different.  While Samnee and Allred are all tight lines and careful construction, Coover feels much looser, more reminiscent of Darwyn Cooke at his most abstract.  This feeling of looseness is aided by the approach to coloring the book, with what almost feels like a brushstroke/water-colour effect.  It may mute detail and act against having highly-rendered linework, but what it gives us is a soft-focus, sepia-toned world which perfectly captures the upbeat mood of the story.

But let’s get back to Bandette, and the aforementioned smile.  This is a story about thieves, criminal organisations, murder plots and assassins.  Executed in a different manner, this could quite easily be a dark, edgy crime thriller.  But no matter what situation Bandette finds herself in, she almost always has that big grin on her face.  And thus the dangerous situations she’s faced with don’t feel so dangerous, they feel fun.  Drawn a different way, you could almost see Bandette being presented as a book for teens and upwards.  As is, though, it feels all-ages, something I’d give a young reader – male and female alike – to show them how enjoyable comics can be.  It feels almost like animation, and I could see this story and its visual style being quite seamlessly adapted into an animated series or even film.  It goes to show what kind of impact the art and can have in shaping the narrative.

Of course, it’s not just Bandette’s smile that showcases her upbeat attitude in the face of peril, it’s her voice, and writer Paul Tobin does an excellent job in this regard.  Bandette is presented as someone who never takes anything too seriously, and always seems to have every situation completely under control.  Tobin imbues her with such an earnest enthusiasm for everything and an infectious joie de vivre that the thought of her being a criminal barely even registers in your brain.  Even most of the police in the story give her a free pass because she does good deeds to make up for her thievery and, come on, she’s adorable.  She’s the kind of character that young readers would want to be, or with the inclusion of the “urchins” – a network of children and teens around Paris who assist Bandette on her adventures and hang out and eat candy with her – the kind of character they could imagine being friends with.  Hell, I’m a grown-ass man, and reading these issues gave me a nostalgic pang and had me wishing I was a kid again and got to be an urchin in Paris.  Really, Bandette could be my favourite new comic character of the past year.

Tobin surrounds Bandette with a well-realised cast of multi-faceted characters who are all more complex than they may first seem.  The Monsieur could easily have just been presented as a foil for Bandette, a grim rival to her self-claimed title as “the world’s greatest thief.”  Instead, he is also thoroughly likeable, more straight-laced than Bandette but still with a mischevous glint in his eye.  And you would be forgiven for thinking that Inspector Belgique, as presented in the first couple of issues, would be nothing more than an incompetent buffoon there for comic relief, but in the recent issues he has been revealed as a figure of quiet, grumpy integrity and emerged as one of my favourite characters in the cast.  Even his assistant in the Special Police – who could just have been a background extra – is given her own subtle little arc where she has romantic feelings for Belgique and he’s totally oblivious to it.

Beyond the characters, the writing is an exercise in economic, accessible plotting.  Every issue is dense with incident, and simultaneously builds on a larger story while being centred around a single action set-piece that makes the comic a rewarding read in its own right.  Issue #1 boasts a frenzied motorcycle chase through the streets of Paris.  Issue #2 has a daring bank robbery and the even more audacious plan to foil it.  Issue #3 has the atmospheric first confrontation between Bandette and Monsieur in the iconic Cimetiere du Pere Lachaise cemetery.  Issue #4 features an issue-long fight scene between Bandette and assassin Matidore.  Issue #5 is the only installment that seems more focused on the overarching plotline that will shape the narrative moving forward and setting the pieces on the board to prepare for that, but even that is all very interesting and rich in character moments.

If I had to pick out one of these chapters for particular praise, it would be issue #4.  Every issue is a joy, but this for me was the best, one of the finest single issues of any comic released this year, and the epitome of everything that makes Bandette so great.  With the inclusion of matador-themed villainess Matadori, it gives us another colorful inclusion into the ensemble cast.  It is constructed around a well-orchestrated fight scene where Bandette never really loses the upper hand, but which nonetheless remains compelling largely due to the playful interplay between the two characters.  Even as Bandette fights for her life and Matadori tries to kill her, they still have time to compliment each other’s clothing and chat about what tailors they visit, with both flashing that trademark grin as they do so.  The Monsieur’s meeting with the mystery lady employing him sets the stage for the larger story further fleshed out in the following issue.  Belgique and his assistant get a wonderful little scene together.  And Bandette makes her most ingenious use of the urchins yet, just when it appears she might be in danger, once again demonstrating she always has the upper hand in any given situation.  And it all ends in a delightful exchange between Bandette and Monsieur which serves to reiterate that same point.

Now that I’m all caught up, I’m sure the wait for issue #6 is going to be unbearable.  But for now, all I can is most heartily recommend Bandette in the strongest possible terms.  Colleen Coover’s artwork is enchanting, Paul Tobin’s writing is charming, it may be scientifically impossible to read this comic without a big dopey grin appearing on your face.  For print purists, there’s a hardcover graphic novel collecting the first 5 issues being released by Dark Horse in November that I have a feeling may be my Christmas gift of choice for quite a few friends.  But for those willing to embrace digital, each issue is available for a bargain price of 99 cents, or 69p!  This is one of the best comics around, seriously.  What do you have to lose by giving it a try?  You’ll thank me!

Bandette #1-5 are available to buy now from Comixology.