Of all the comics in the New 52, there has been none that has jumped on and off and on and off and on and off and on my buy list more than The Fury of Firestorm.  The key conflict at the core of this indecision was between my excitement over the excellent creative team – Gail Simone’s one of the most dependably great writers in comics, Ethan Van Sciver is known as a top-notch idea man, and his work on Nothingface with Kel Nuttall made me a fan of Yildiray Cinar – and the fact that I just don’t give a crap about Firestorm.  Right up to the point where I picked up this first issue off the shelf, I was unsure whether or not the former could overcome the latter.  In the end, however, I don’t think it could.

Gail Simone is a writer I always enjoy.  But even she couldn’t get me to care about Ronnie Raymond and Jason Rusch.  While I appreciate in theory the conflict between the two that her and co-plotter Van Sciver were trying to set up, in execution each one just came across as unreasonable in their dislike of the other, Jason moreso than Ronnie.  And as a result, neither character was really able to win our sympathies as human beings before they got turned into Firestorms.  Furthermore, as someone who has never given the Firestorm mythos so much as a sideways glance, I don’t think this issue did much to introduce the concept of the characters or the nature of their powers to me.  Maybe the idea is to set up a mystery that will be explained over the course of the story, though, so I’ll be a bit lenient on that front.

Where Gail seems much more comfortable is in the depiction of the villains hunting for prospective Firestorms.  I’ve mentioned before that Gail Simone excels at quickly establishing truly loathsome, despicable villains, and that trend continues here with some shady government types taking a “by any means necessary” approach to tracking down the Firestorm Protocols, ruthlessly killing all they come into contact with.  The most horrible thing about it is how impersonal the acts of murder and torture are to them, as the agents joke around with each other and make small talk about stuff outside of work while engaging in acts of brutality.  It’s little touches like this where Gail gets to impose more of her own distinctive voice onto the work.

Once again, Yildiray Cinar’s pencils are great,  Crisp, clean, complimented by the lush, textured colors of Flash colorist Brian Buccellato, the best compliment I can give to the visuals of the comic is that the interiors aren’t a disappointment upon following a typically stylish Ethan Van Sciver cover.

As for Van Sciver’s injection of ideas, you do get a sense of a great twist on the Firestorm concept here, and it’s the most interesting part of the issue.  But it doesn’t happen until the last page, by which point it may be too late to make an impact for this first issue.

So, after reading The Fury of Firestorm: The Nuclear Men #1, I’m much in the same position as I was before.  My admiration for Gail Simone, Ethan Van Sciver, Yildiray Cinar, and Brian Buccellatto too (I didn’t even know it was him working on the book until I checked the credits for this review, he displayed some real diversity from his trademark style on The Flash) remains as strong as ever, and each showcased their stuff effectively in this comic.  But at the end of it all, I still just don’t give a crap about Firestorm.  The creative team didn’t really do anything wrong.  Maybe the character just isn’t for me. 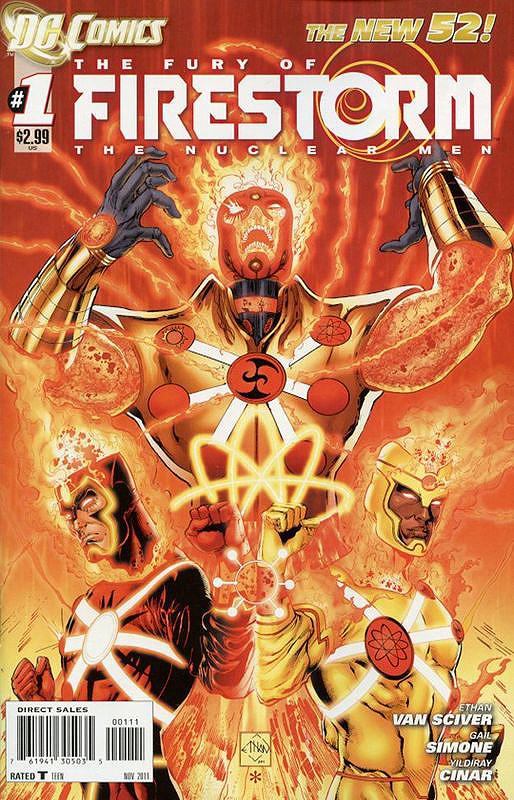 We are now less than a week away from DC Comics’ much hyped linewide relaunch.  This radical – and controversial in some circles – plan involves bringing the current ongoing publishing line of the DCU to a close, and launching with 52 new #1s, and in many cases altered or even rebooted continuity, in an effort to make the comics more accessible to newcomers and jaded fans alike.  Whether you’re in favor of this move or not, you can’t deny that it’s got people talking.  In spite of Marvel’s best efforts, DC has dominated the news sites since June, and the retailer order numbers are reportedly very high, with Justice League #1 apparently topping 200,000 buys.  But the big test will be next week and onwards.  You might be able to get people’s attention, but can you keep it?

I have had some reservations, but overall I’m very excited about the DC relaunch.  I’ve been trying to think what I can do to participate, beyond buying the books that take my fancy and recommending books to others.  One thing I can contribute is reviews of the comics I read, which gave me an idea.  Everyone who has a blog, or who writes reviews for a comic site, why not let DC know what you think?

I’m gonna set up a #New52Review hashtag on Twitter, which I’m going to use to link to my reviews of the new titles here.  But I don’t want to be the only one.  Anyone out there who has a blog, or who writes reviews for comic sites, write about the titles you buy.  DC have reached out to us, so we should try reaching out to them in return.  Let them know what books we like and why, or even what books we don’t like so much and how they can improve.  It could be a good way of showing  the creators our appreciation, as well as promoting the comics that are worth reading.

I don’t expect to be picking up this many titles come October, but for this first month  at least, I’ll be trying 18 #1s from the New 52:

I’ll be posting up reviews of as many of these books as I can each week.  The reviews might not be quite as in-depth as my reviews usually are, since I’ll be trying to write so many reviews, but I’ll be offering up something.  And I’ll be linking to the reviews using #New52Review.  I hope you guys will do the same.  Here’s to exciting times ahead in the comics world!