This month marks the arrival of the 5th annual 30 Characters Challenge, the excellent event run by ComixTribe publisher Tyler James, where participants have to create a new comic character for every day of the whole month of November.  I participated in the first year, successfully completing the challenge with 30 badly-drawn characters of my own, but haven’t done it again since.  I won’t be participating this year either, but thought it might be fun to spend each day writing up a little showcase to celebrate a new comic character who showed up in comic pages for the first time this year.  Comics are one of the most highly inventive mediums around, and this has been a particularly strong year for pumping out exciting new stories packed with compelling new characters.  Let’s take a look at some of my favourites. 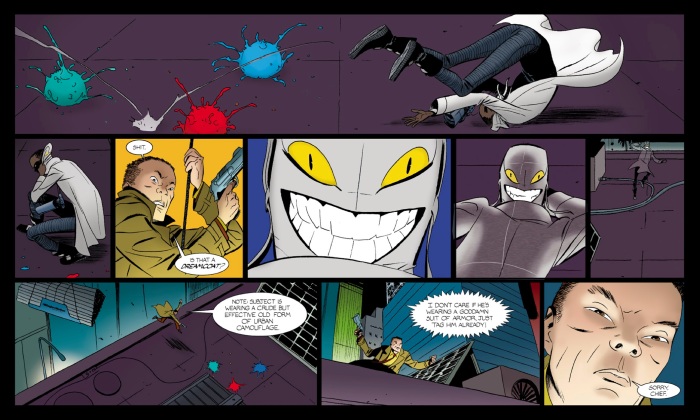 One of the most stellar comic series debuts in a year full of them has been The Private Eye, the debut project from Brian K Vaughan and Marcos Martin’s digital-only, pay-what-you-want initiative, Panel Syndicate.  The Private Eye is set in a marvelously-vivid future where the internet and its vast network of secrets and digital double lives has collapsed, and people have turned to donning masked avatars to create physical alternate personas for themselves in the way our generation might do in a chatroom or message board.  Into this world steps Patrick Immelman, or P.I. for short.  This future has seen the mainstream media become the most powerful law enforcement entity on the planet, and so as a paparazzi, P.I. is the equivalent of a downtrodden private eye from an old noir movie.

P.I. is aware of the comparison, of course.  He nurtures it.  The name “Patrick Immelman” is an alias tailored for its initials, and his office is a love letter to a bygone cultural era.  To begin with, P.I. is pretty much your standard grisled gumshoe archetype, and it’s up to Marcos Martin’s splendid visuals to make him interesting.  And he most certainly succeeds, crafting this instantly eye-catching figure with lanky, elongated limbs and super-skinny jeans that create this slender, almost insect-like frame.  And, as seen above, he’s given some brand-worthy attire in the form of his invisibility-emulating “dreamcoat,” complete with that eye-catching smiling face on the hood that adorned the first issue’s front cover.  It’s a stellar character design, and so when I went to a Marcos Martin signing event here in Glasgow a couple of months back and everyone else was getting Spider-Man or Daredevil sketches, I made sure to get a P.I., what turned out to be the first time he’d ever sketched the character in print!

But P.I. isn’t just a striking visual, as over the course of the series Vaughan has introduced increased complexity to his persona, giving him a vulnerability under his steely exterior and a devastating family tragedy looming over him.  More and more P.I. is becoming someone trapped in something much bigger than him, and as he finds himself in situations increasingly outwith his control, that “cool cat” demeanour he put on at the beginning of the series is starting to slip.  It’s fascinating to watch, and I’m keen to see how he develops from here…. but he has to get out of the fix he found himself in at the end of issue #4 first! 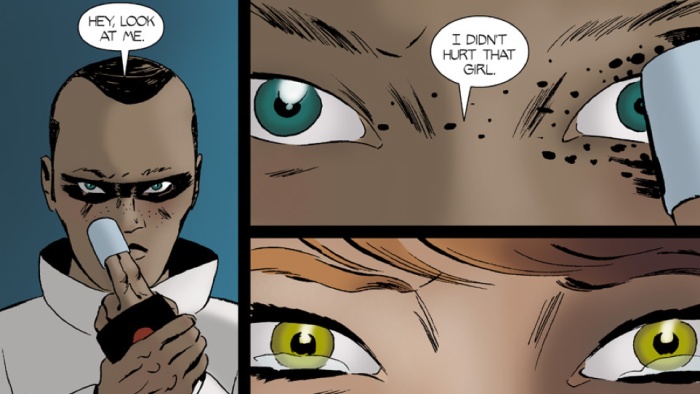