Okay, let me talk a wee bit about Two-Face.

Those who know me will know that The Joker has long been my favourite comics villain, one of my favourite characters in fiction. They might not know that for many years before The Joker took that top spot it was occupied by Two-Face. There’s a pivotal memory from my childhood where my experience of the Batman mythos expanded beyond the Burton films and the four villains who appeared in the 1966 Adam West movie… okay, 5, I saw the Mr Freeze episode of the old TV series too. But Two-Face was a key figure in me becoming fascinated in a wider Batman world, and getting into the comics… a gateway drug for getting into comics in general.

Back when BATMAN: THE ANIMATED SERIES first aired on UK TV, around 1992 so I’d have been 5 or 6, one of the earliest episodes I still have memories of experiencing for the first time was the two part Two-Face origin story. The cliffhanger ending of the first episode – where Batman’s friend, District Attorney Harvey Dent, is horribly disfigured, the reveal of his face shown in gruesome high-rendered detail as he runs screaming out of the hospital ward into the thundery night – horrified and transfixed young me. One of my earliest memories of breathlessly anticipating the next episode of a TV series, with the only earlier memories being the “same Bat time, same Bat channel!” cliffhangers of the Adam West show reruns. In fact, my mum was due to take me out with her to go see her friend the following Saturday, and the only way she got me to go was by making her friend record the episode so I could watch it once I got there. And that episode sealed the deal on Two-Face being my new favourite baddie, that raspy, cut-glass voice entrenched forever in my memory. From there on I would fill endless sheets of paper drawing him, and I quickly nabbed up his BTAS action figure and carried it around with me everywhere!

Fast forward a couple of years, and I was giddy to learn Two-Face would be the villain of BATMAN FOREVER, played by Tommy Lee Jones. I remember being so hyped for that film, and being overjoyed seeing Two-Face on the big screen – don’t be hard on me, I was 8. I have a weirdly specific memory of being on holiday in Majorca and endlessly re-enacting a Two-Face’s death scene from that film, throwing a handful of coins in the air and grasping wildly for them with a death scream as I tumbled backwards into the pool. 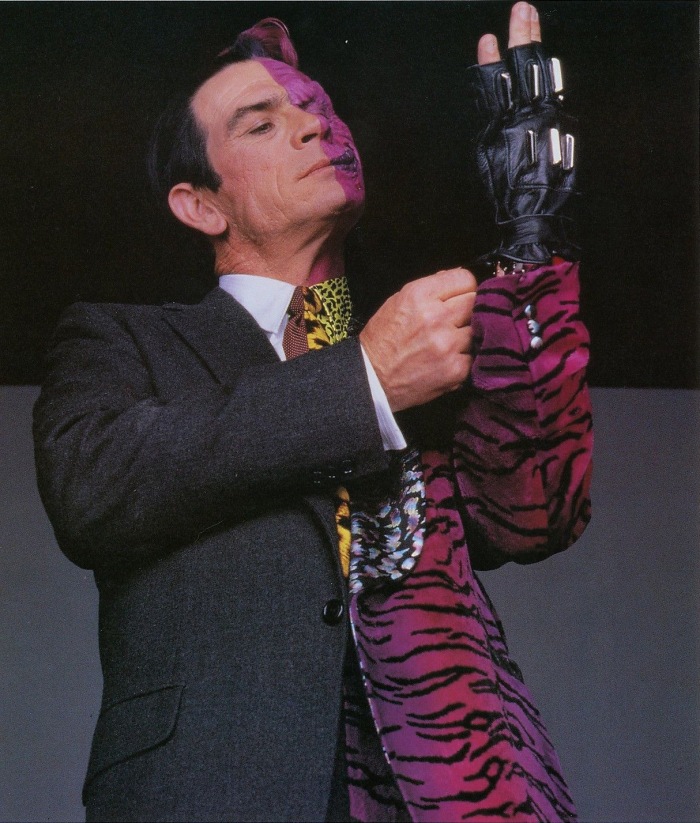 It was around that time I made my first foray into reading single issue American comic books. I went to Candleriggs Market with my cousin, where they had a big comic stall set up, and I was specifically looking for Two-Face comics. I ended up leaving with a couple of chapters of Matt Wagner’s FACES.

Fast forward a decade or so to 2005, and I’d drifted from comics a bit after a foray into Marvel back when I was moving into my teens. But now at age 18, one of the two graphic novels which got my back into comics with a vengeance – the other being THE KILLING JOKE – was THE LONG HALLOWEEN. Which is of course one of the all-time great Two-Face stories. If, from this point on, The Joker was firmly established as my #1 Batman villain, Two-Face was #2 (appropriately enough), and has never really slipped from there. 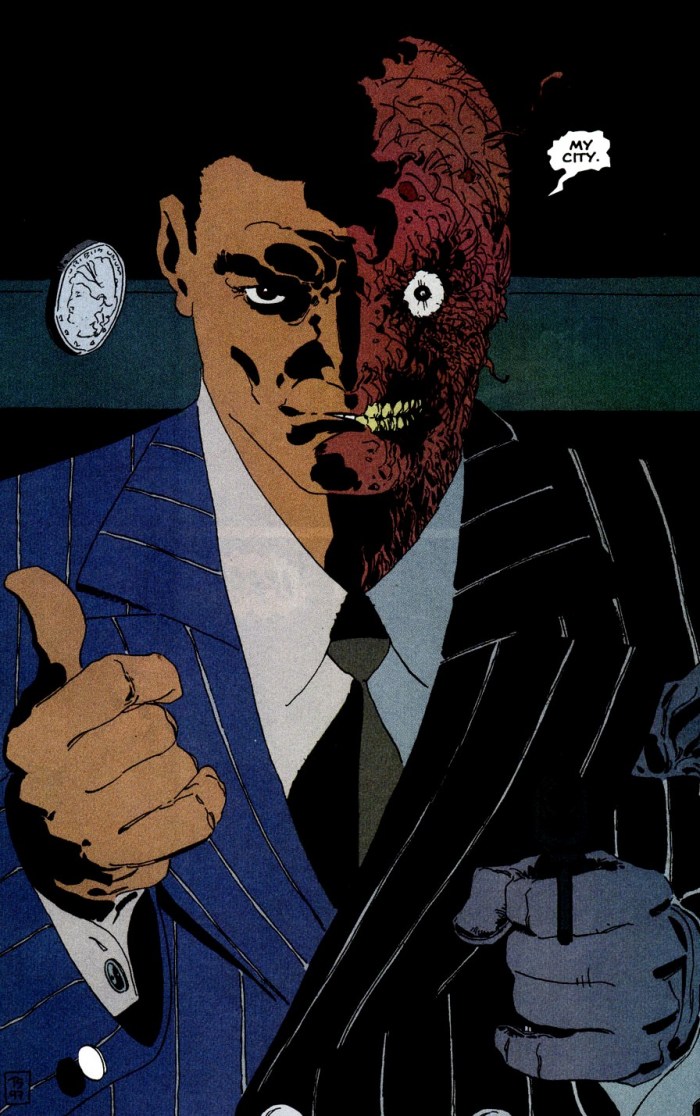 Of course, The Joker alone was enough to make THE DARK KNIGHT my most anticipated movie ever, but when I found out that Harvey Dent and then Two-Face would also be in the film, that pushed my hype to astronomical levels. I was just as excited to see Aaron Eckhart’s performance as I was Heath Ledger’s. And while I know some didn’t like Two-Face’s inclusion, I loved it: a Batman movie with both The Joker AND Two-Face! It’s like if you tried to create my ultimate film experience in a test tube. No wonder it is still my all-time favourite film.

Also, I probably shouldn’t admit this, but one of my proudest writing achievements remains my two-year long stint writing Harvey Dent in the online RPGs I used to play in. When I wasn’t doing half-assed rips of scenes from THE SHIELD and THE WIRE, I relished digging into that character’s psyche in obsessive detail.

It’s funny how there are certain fictional characters who, when you look back through your life, you see were always there in some form, marking out the big moments like members of the family. Two-Face is one of those for me. He’s one of a very select few characters whose appearance will always interest me, and tempt me to pick up even a series I wasn’t previously reading.

Two-Face has been relatively quiet in the New 52 era. Apart from a brief storyline in the underrated Pete Tomasi run on BATMAN & ROBIN (I’d say Tomasi/Gleason but I believe Doug Mahnke drew that particular arc), he hasn’t been given much to do. Which is why I’m VERY excited about his big return in ALL STAR BATMAN, written by Scott Snyder and drawn by John Romita Jr, out this Wednesday.

Snyder did amazing things with The Joker during his BATMAN run in “Death of the Family” and “Endgame”, making the character the most frightening he’s been in ages. I can’t wait to see what he does with Two-Face. As the release draws near I realise my anticipation is off the charts!